There’s nothing like fresh, handcrafted beer from your local brewery. Each brewery has its own distinctive feel to it and guarantees beer that is fresh with unique flavors that are special to that brewery and its makers alone. If you love beer and live in Northern Colorado, make sure to check out these 5 distinct breweries in Northern Colorado:

Horse & Dragon Brewing Company is a family-run taproom hoping to bring people together through great flavors and happy craft beer experiences. Linsey Cornish, Horse & Dragon’s head brewer, creates recipes with a balanced combination of sweet malts, bitter hops, and other fun ingredients. Since opening in 2014, they have made and poured over 40 different beers. If you visit their taproom, you’ll not only find fresh and tasty craft beer, but their staff is also made up of some of the friendliest beer folk around. You can find Horse & Dragon in northeast Fort Collins. They are open daily from 12 to 6 pm.

Big Beaver Brewing Company has been creating awesome beer that tastes great since 2010. Big Beaver’s brews are unique in that their recipes are a result of over “25 years of studying the key ingredients that go into exceptional beers.” The owner of Big Beaver has a Ph.D. in Industrial Microbiology from CSU, so you know he’s serious. Big Beaver beers are never filtered, pasteurized or centrifuged so that you get a beer that is nothing but delicious. They are also committed to minimizing their impact on the environment by reusing, reducing, and sustaining. The Taproom located in west Loveland is simple and comfortable where you can truly mingle, with daily specials and 16 beers on tap.

Crabtree Brewing Company is Greeley’s First Production brewery. Owner Jeff Crabtree began by brewing beers that were self-inspired, rather than simply brewing traditional styles of beer. He uses a 10-barrel brew house to produce an extensive variety of unique brews. Crabtree’s taproom, located on West 29th Street in Greeley, is a great place to enjoy a distinctive beer while joining in on some fun. Every Friday, head over for Firkin Friday. Firkin is a cask-conditioned beer carbonated by a slight fermentation. Each week, Crabtree Brewing has a new concoction for you to try. They also feature live trivia nights and Thursday flight nights at their taproom, making it the perfect laid-back place to enjoy a local craft beer.

Dungeons & Drafts is a thoroughly unique tavern aimed specifically for geeks and gamers who love to socialize and knock back a few drinks while playing a game. Dungeons & Drafts combines local microbrews and good food with games ranging from traditional-geek to modern-casual. Dreamt up and made reality in 2015 by avid gamers, Melissa and Manny Garza, Dungeons & Drafts is a unique destination where self-proclaimed nerds can enjoy a cold beer and play their favorite game. Dungeons & Drafts has 30 rotating taps of beer mead and cider from primarily local brewers, game-themed cocktails, and a menu that is vegetarian, vegan, and gluten-free friendly.

Scrumpy’s Hard Cider Bar is a slightly different style of brewery that focuses on hard cider along with amazing beers and delicious sandwiches on made-from-scratch bread. Scrumpy’s ferments and kegs their own ciders on site, four of which they have on tap. In addition to their own specialty ciders, Scrumpy’s offers the widest variety of ciders from around the world, with 18 on tap. For those new to cider or if you just have a hard time deciding, make sure to try a hard cider flight. With a flight, you get several samples of different varieties of cider and it’s a great way to find what you like. Make sure to stop in to Scrumpy’s on N. College Avenue in Fort Collins for a truly unique brewery experience. 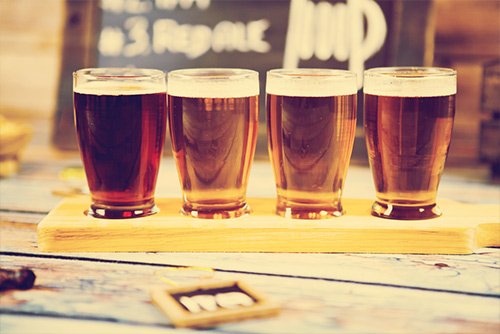