If you’re looking for a family-friendly activity that’s a little out of the ordinary, the Swetsville Zoo in Timnath will make for an interesting weekend excursion. Built by Fort Collins resident Bill Swets, the Swetsville Zoo does not feature your typical, open-air enclosures of wild animals; rather, it is an eclectic showcase of animals and other interesting sculptures that Swets built from various metal parts.

Located just on the east side of I-25 off Harmony Road, the Swetsville Zoo has free admissions (a donation is very much welcomed though) and will definitely grab your attention. Swets eclectic collection of metal creations is found on the family’s 35-acre property along the Poudre River. A winding wooden path and a self-guided tour sheet will lead you through the over 160 sculptures found in the Swets’ yard.

Each of Swets’ one-of-a-kind creations is made from scrap metal, spare machinery, car parts, and his own imagination. Every piece is meant to be humorous and quirky, the result of Bill’s own “twisted” humor as he describes each creation. He says that each sculpture is built in his head before he even begins to actually build them, and they typically turn out just as he imagined they would. Among these metal realizations of his creativity, you will find dinosaurs that tower overhead, eccentric spaceships, train engines and vehicles, gigantic insects and animals, and so much more. 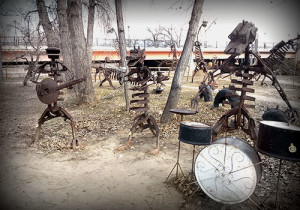 The entrance to the Zoo appears to be guarded by two metal dragons, flanked by a metal re-creation of Snoopy flying his doghouse. Just behind them is a white and yellow castle façade that was originally built in 1997, and then rebuilt in 1998 after a small fire. All throughout the Swetsville Zoo, you will find quirky creatures as well as more artistic floral sculptures. Kids will love the larger-than-life windchime and the large musical structure “Symphony” where they can grab a mallet and create their own unique music. One of the Swets’ most popular creations is a “heavy metal band” consisting of three metal dinosaurs, one seemingly singing into a microphone while the other two play the banjo and drums. Along the river are several huge dinosaurs of different varieties and heights, a stout tin robot that caught a big fish with a gigantic fishing pole, and a giant spider made from an old Volkswagen Beetle. The Autosauraus II is a drivable half-animal, half-machine invention made up of benches and the engine of a 351 Ford. With over 160 individually unique sculptures, Bill’s Swetsville Zoo is definitely worth checking out.

Bill Swets began his hobby of making these whimsical scrap metal creations in 1985 as a way to cope with insomnia. His hobby quickly became more than “just a hobby” and soon his Swetsville Zoo became a roadside attraction. Since 1985, the Swets and their Zoo have endured through many hardships and trials including fire, illness, and flooding as well as the threat of new development seeking to make its way onto the property. However, this imaginative treasure is still standing and ready for people of all ages to enjoy. It’s the perfect out of the ordinary place to take your children on a Saturday afternoon and let their own imaginations wander as they make their way through the realization of Bill Swets’ imagination. 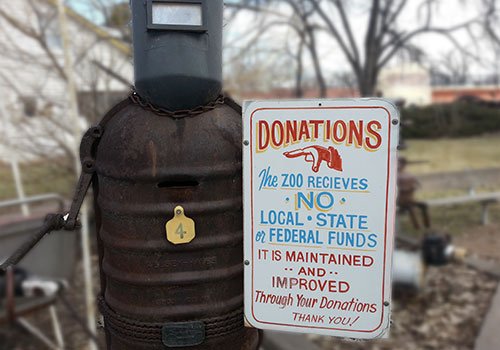